When tasked to dissect a story I not only enjoyed, but one that was important to me, I looked into my everyday life for inspiration. Like I said in my initial interpretation of our theme, I like to tell my story best by showing how the people around me impact my life. Consequently, I looked in the direction of my best friend, Tyler Michael–who has a ridiculous, yet respectable, obsession with Lewis Capaldi. His favorite song being “Before You Go“.

Although this song wasn’t really important to me when I met him–now, 8 months later, it is probably the song I listen to the most. From car rides to Cook Out, to him just blaring it on a speaker, he loves to just belt the lyrics as loud as possible. He is probably the most confident person I know, and he is one of my greatest role models. Tyler has taught me how to unapologetically be myself from the get go of meeting people and I am forever thankful for that.

8 months ago, belting lyrics to a sad song when I am in fact, not sad, would have sounded crazy and I would have wondered why. However, now screaming (or just listening to him scream) to “Before You Go” is one of my favorite parts of the week.

“Before You Go” tells the story of how Capaldi’s aunt took her own life, but more closely shows his story of coping. He uses the lyrics, that almost resemble a letter to his aunt, in order to express his frustrations. He walks the audience through his initial anger to his feelings of guilt–something he believes is natural in the grieving process. Capaldi believes that wounds don’t ever really heal, we just learn how to live with them. Then finally, in the bridge, he calls for others to reach out to those who are important, and stop making emotions a taboo topic in conversation. To see more about the artists meaning in his lyrics, I highly recommend listening to his interview with Genius.

This representation of Capaldi’s healing tells the story of him walking through the stages of grief.

Denial, in the intro lines attempting to convince himself he hates her. Anger, directed towards himself in not acting to help her, in the chorus. Guilt, stemming from the anger in not acting. Depression, in acknowledging that this wound will be with him forever, making him feel worthless. And acceptance, in encouraging the audience to make open lines of emotional communication in all relationships.

Using the stages of grief (knowingly or unknowingly) as an outline highly benefits the song by making it something everyone can relate to. Everyone has been hurt in some form at some time, and if you haven’t yet, you probably will be at some point (sorry to be the bearer of bad news). One important factor in the “story” of healing is that it isn’t linear, which Capaldi also depicts in this piece. By placing the most draining feelings in the chorus (anger, guilt, and depression) he symbolizes the return of these emotions one can have in the healing process–even after one feel like they’ve moved on.

This process is something I can heavily relate to, as I’m sure many others. My “heartbeat” has dropped, but none of my worst moments have been my lasts, and I intend to keep it that way.

I highly encourage anyone reading to give “Before You Go” a listen, because no matter the case, having someone, or something, you can relate to in a time of grief, is important. Or if your car rides begin to feel a little too quiet and you need something to scream to in order to make you feel like the main character (because listen, it’s your story, you are), this will also do the trick. 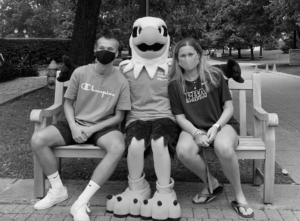